Link Live Streaming Indonesia vs Chinese Taipe, Kamis 7 Oktober 2021 - The schedule for the live broadcast of the AFC Asian Cup 2023 Play Off match, the third round will be presented starting on Thursday, October 7, 2021. In that match, the Indonesian national team will fight against Chinese Taipei. Check out the live broadcast schedule for Indonesia vs China Taipei on 7 and 11 October 2021 Live Indosiar and Video. 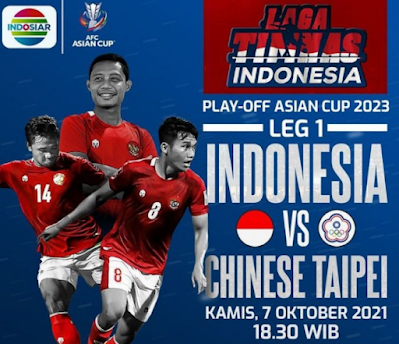 The two-legged match that will be played by the Indonesian National Team vs. Chinese Taipei in the play-off round of the AFC Asian Cup 2023 will be held on October 7 and 11, 2021. The two matches which will take place at Chang Arena, Buriram will be broadcast Live Indosiar and Video.

Later, the winner of the Indonesia vs China Taipei match will join 22 other teams that have already qualified for the third round of the AFC Asian Cup 2023.